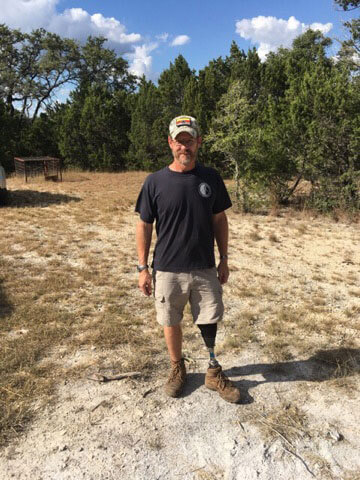 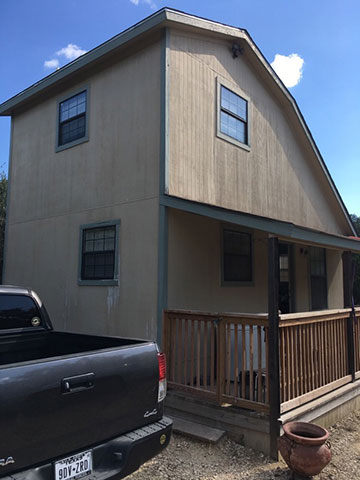 Mr. Tipton, as most veterans do, relies upon personal grit and gumption to thrive on a daily basis. He has an active lifestyle, being an avid gamesman and volunteer to his Veteran brothers and sisters. Mr. Tipton’s “can do” attitude and spirit of self-reliance, in spite of his physical disabilities, portray the drive and mentality of today’s Veterans.

His love for the outdoors led him to buy a home in the beautiful Texas Hill Country. Unfortunately, the home came with an upstairs master bedroom, which was extremely difficult for Mr. Tipton to regularly access on a prosthetic and crutches. Shortly after moving in, Mr. Tipton realized the daily task of climbing the stairs to the second floor was overwhelming and resulted in him camping out on the couch downstairs. Now unable to relax and recharge in his own home, Mr. Tipton felt trapped in a place where he dreamed of being free.

Knowing that his couch was not a long term solution, Mr. Tipton reached out to Adapt A Vet. With Adapt A Vet’s support and design, Mr. Tipton will be able to add an additional 400 sq ft to the downstairs, creating a separate master bedroom off the living area. A roll-in master bath with tub and transfer bench are underway.

Exterior ramps to the house and carport will increase the ease of movement for Mr. Tipton within his home. Relocating the current washer and dryer area from the barn to the new addition is also in the works. Additionally, central air and heat will be added to the existing home and addition along with full LED upgrades. Mr. Tipton will now be able to enjoy the freedom and independence he imagined when first purchased his country home.